Femoroacetabular impingement (FAI) is, as the name suggests, an impingement or abutment of the chondro-labral structures between the femur and acetabulum. Whilst the diagnosis of femoroacetabular impingement has only recently gained attention, it is known that the presentation is more common in the athletic population. High activity athletes are at increased risk; particularly athletes who participate in sports which require them to frequently move into a position of internal rotation and flexion. This makes it an important diagnosis for the sports physiotherapist to be aware of current research and the best practice.

There are two subtypes of FAI; cam and pincer (Keogh et al 2008), which are discussed below: 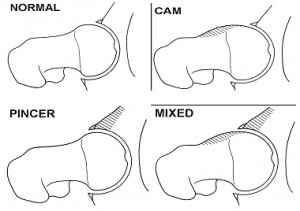 CAM: Cam impingement occurs when the patient has an aspherical femoral head and there is an abnormal head/neck junction with an increased radius at the waist. At extremes of ROM this will result in femoral abutment causing sheer stress on the articular cartilage and a subsequent labral tear or detachment.

PINCER: Pincer impingement occurs when the patient has excessive acetabular coverage (or “over coverage”). This over coverage will cause femoral abutment against the chondrolabral tissues at extremes of ROM.

MIXED: The majority of cases are a mixed presentation of both

Assessment and Diagnosis of Femoroacetabular Impingement

The diagnosis of femoroacetabular impingement is made clinically and radiologically. The subjective, objective and imaging indicators are discussed below:

SUBJECTIVE: Clohisy et al. (2009) studied the clinical presentations of patients with symptomatic F.A.I. They found the athlete often presents with an insidious onset (65%) of groin (83%) or anterior hip pain. The pain is often intermittent, and exacerbated by physical activity (65%) and sitting (65%). A common misdiagnosis or competing hypothesis is a soft tissue injury of the groin or anterior hip musculature. This is an important differential diagnosis to be aware of.

OBJECTIVE: Phillipon et al (2006) found a significantly reduced range of motion in the symptomatic side of patients with FAI. They found differences in flexion (9 deg), internal rotation (4 deg), adduction (3 deg). The hip impingement test was positive in 99% of cases, and FABER’s in 97%.

These results are similar to those of Clohisy et al (2006). They found that the anterior impingement test reproduced anterior groin pain in 46 of 52 (88%) tested. 69% of patients had a positive FABER test, and 56% had a positive resisted straight leg raise.

IMAGING: Imaging can confirm the clinical diagnosis of FAI. Osseous abnormalities are identifiable on both X-ray and CT scanning, with increased accuracy achieved through CT. However, you should be aware of the increased radiation dosage associated with CT scanning.  These will be useful in initial diagnosis to identify cam and pincer abnormalities.

CONSERVATIVE/PHYSIOTHERAPY MANAGEMENT: Unfortunately conservative physiotherapy management is often unsuccessful in young, highly activity athletes (Phillipon et al 2006). However, it may be helpful in some patients. The aims of physiotherapy are initially anti-inflammatory in nature. This includes rest from aggravating activities and electrophysical modalities. Other physiotherapy techniques you MAY find helpful in the early phases of treatment are:

SURGICAL MANAGEMENT: As previously stated, the majority of athletes will require surgery. Ng et al (2010) performed a systematic review on the efficacy of surgery for femoroacetabular impingement. They found that surgery was beneficial in the majority of presentations (~70%). They also showed that worse surgical outcomes were associated with increased levels of osteoarthritis, and these patients generally went on to to have a total hip replacement.

As for surgical options (which I know is not our decision to make), a systematic review by Bedi et al (2008) compared the outcomes of two surgical techniques; open and arthroscopic treatment of labral tears and FAI.  They found insufficient evidence to support open surgical dislocation, the historic and supported gold standard, as a superior procedure to arthroscopic management.

RETURN TO PLAY OUTCOMES: Phillipon et al (2007) assessed the use of arthroscopic decompression in 45 professional athletes. The athletes, who were mostly male and hockey players, underwent surgery followed by an individualised (and poorly described) rehabilitation period. The athletes were allowed to return to play at 12 – 16 weeks post-operatively.

The real take home messages from this research is that:

Man, what a long article. Hopefully you got something out of this. What are your thoughts or experiences dealing with femoroacetabular impingement? Be sure to let me know in the comments or catch me on Facebook or Twitter. Are you a physiotherapist or physical therapist looking to promote your own clinic, check this out.

For more information check out these references!